Like a rosebud amongst the manure
on which it feeds,
are new prospects tainted
by the stench
of the corpse
left behind.

Interests once divulged
into ensuring its existence,
you are now torn apart
by the requirement to accept what's past
as past
and build on its deposits.


As the odour
wafts through the nostrils of your understanding
you recognize
it is not entirely disagreeable;


Underlying the smell of memories to missed,
friendships to take on new colours and
changing of roles
is the subtle sweetness of His hand.

Once clogged by the selfishness of your flesh
-its utter cockiness which propounds that all you think, do and desire is right-
Once clogged by such filth
you could never defer your logical interpretation
to the desires of Him you were created to please.

But now,
(Thank God!)
your mind tickled by the touch of His hand,
you sneeze
And you breathe...

the battle rages on


a faint reminder breezes across my mind
so courage i fight to find
yet courage i cannot find to fight.

i start to face the darkness with an open mind,
perhaps the darkness i won't mind...
as it washes over me
it says
"it is over, come with me"
temptation seeks to overcome me.

my soul i feel the darkness wrest
and my heart longs to rest
but it CAN NOT!
MUST NOT!
in this soulless solace

i drift in and out of consciousness
and the question arises in my head;
have i reached the end?
i hope this thought's a lie
but i fear it may be true
and i fear hope may die
at the hand of fear...

if hope does exist,
my heart i must re-guard, lest
i fall deeper and regard less
the things i once esteemed.
see, the battle rages on,
regardless
of if i stand or if i fall
if i've gathered weapons or none at all

When I was 5, or there-about, I watched an episode of Sesame Street which I'll never forget. A young girl, not much older than myself, was taking us through what looked like a junkyard. We passed through a dim corridor between a zinc building and a concrete wall and to the back of the yard. She strapped on some wooden beams to her legs and started walking... taller now than the wall which previously towered over our heads.

I could feel a strange excitement bubbling up inside of me like none I had felt before. It wasn't the kind of thing would make me yell "Mummy, mummy! I want to do this!" because it didn't seem like something that was feasible, especially since I lived in Jamaica and the video was done in some other part of the world. But it was an excitement I hid deep down.... a hope that I never truly let go of; that one day, I could be transformed into the majestic Moko Jumbie.

Somehow, as a teenager, I ended up in Trinidad. The plan was to complete my final two years of high school and then return home. That didn't happen. Those two years ended up being the best in my life and so I decided to stay just one more year, and signed up for a Visual Art certificate course at the University of the West Indies.

It was there that I heard these words: "We're going to the Moko Jumbie camp on a field trip."

It was early 2009, I was 19 and these words spoken by my tutor at the art school resonated against that hidden hope. The one I had all but forgotten. "What did you say?", I asked with a heightening pitch. I could barely believe my ears. At that time I didn't specifically remember the Sesame Street showing, just that this was something I always wanted to do. At the camp, as I was strapping on the stilts, I remembered the show and I mentioned to my tutor. "Oh yes, he said, this is the same place that was on the show".

This knowledge only heightened my euphoria as I moved around on my 2' stilts. It was a feeling I had never experienced before not just excitement but contentment.... I had actually achieved a dream. And even though the events leading up to it weren't by my own doing it's a feeling I relished and which taught me to always allow room for my dreams to come true.

So even now, I don't feel confined or defined by my physical location or current ability or stage in life. I count no aspiration of mine impossible instead I'm eager to keep learning and develop; to exist in a state of readiness so that if any opportunity comes along I may be able to grab it. 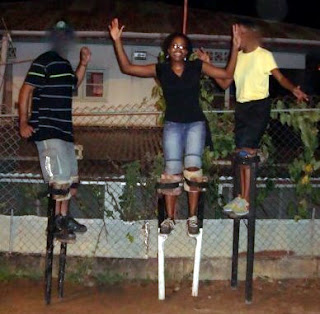 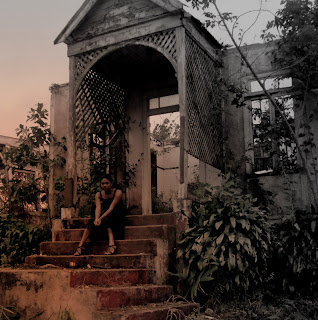 What's a house without walls?
A travel mug without a lid?
A refrigerator without a door?